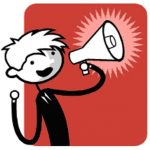 In his last article, ou fellow member of the Electrical Engineering Community Milan told us about main electrical characteristics of DC and AC generators and its usage, regulation and construction. From this content he made primary distribution.

But what will happen when we don’t have primary sources, shall we have electrical power? Yes we will, because secondary power sources are installed on aircrafts.

Check the article below for further explanations…

In the case of typical civil aircraft, power can be accepted from the following sources:

This power shifting is performed by contacts on switchers. Beside the power switching contacts, auxiliary contacts are used to ensure contactor status open or closed to other airplane systems. Also, when we have a malfunction of primary power source, these switchers are used to power off the primary aircraft bus bars by using Electronic Load Control Units (ELCU) or smart contactors for load safety. This ELCU is used when electrical current is higher than 20A per phase. 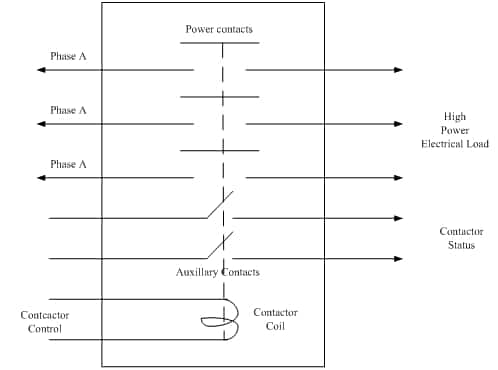 The picture 1 shows a line contactor used in Generator Control Breaker (GCB) system. The line contactor for GCB was widely used, but nowadays we have ELCU in almost all aircrafts.

The difference between line contactor and ELCU is that in ELCU we have current-sensing coils that provide measurement of electrical current of all three phases. Further, this protection enables matching of characteristics and gives precise load of every phase. In this case, ELCU can adjust phase usage if one of the phases is more loaded than another two.

This principle of phase measurements is a major control point between generator and current distribution through aircraft electrical system. The principle of ELCU was shown in the picture 2. 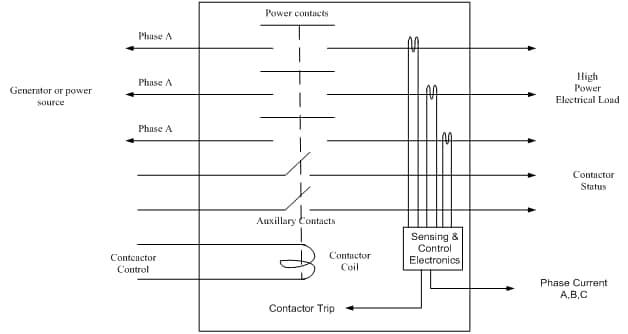 Power conversion is one of the main parts of secondary power distribution. In many situations, it is required to convert power from one AC to DC or to another AC form. Typical conversions are:

Inverters convert 28VDC to single – phase 115VAC and this is first alternative supply of 115VAC after AC generators failure. This is very important way of supply; because when malfunction of generator occurs inverters provide 115VAC for vital and essential consumers. For instance, when we have primary AC failure during specific flight conditions, such as autoland, inverters secure non-break system process, and procedure of autolanding will be carried out properly.

Earlier, inverters would have been a rotary machine, but nowadays we have only static inverters. Static inverter use high power, fast switching and Silicon-Controlled Rectifiers (SCR) to synthesize the AC waveform from DC input.

The TRU are used for power conversion of 115AC to 28VDC. Mainly, we have installed three-phase AC power, which is input for TRU and on its output, as you can see in the Picture 2, we have 28VDC. The TRU consists of primary and dual star secondary transformer windings bonded with 3-phase wave rectification to ensure 28VDC conversion. 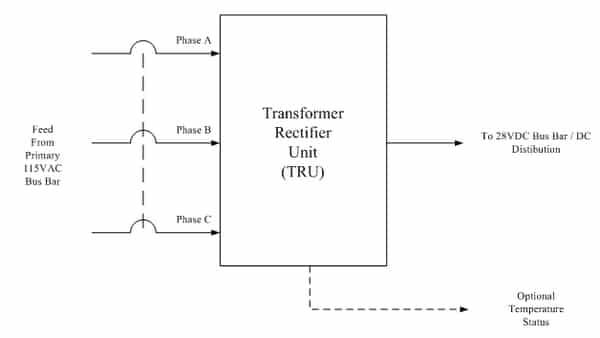 These devices typically convert a large amount of power, and for that reason TRUs have to dissipate a lot of heat, and therefore those devices are cooled with forced air. TRUs are usually operated as single point of conversion, but they could be deployed in parallel operation mode similar to parallel operation of 2 DC generators.

Conversion from 115VAC to 26VAC

This type of conversion is provided by autotransformers. Those devices ensure a simple voltage step-up or step-down conversion. In most cases, we have 115VAC to 26VAC conversion. The 26VAC is used for aircraft lighting, and the easiest way for supply is direct conversion form 115VAC.
Those autotransformers are with low power, and mostly it is enough to have 1-2 KVA.

Secondary power distribution is very important part of aircraft electrical system. At the beginning we talked about power switching, and what is going to happen when generator failure occurs.

Further, power conversion is provided through 3 major conversation types. It is important to have stable and good conversion of power to replace primary power source.

What comments or questions do you have for Milan? Use the comments section right below.