Happy New Year everybody! Hopefully 2015 will be as great as 2014! We already receive articles from some members of the community and we’re so glad to see your motivation. Here’s an article from Steven Mill who gives you tips to prevent noise in singal cables…

Noise, also known as interference, is defined as an interruption caused to the originally transmitted signals by some unwanted stray signals, generated in the wires of the signal cable. Interferences can both be present in temporary and permanent forms.

Irrespective of the form, noise can tremendously lower the quality of the desired signal, often leading to poor performance of the entire communication system. In cases, such as lightening, noise produced in the signal cables can be very unpredictable.

Reasons for noise in signal cables and preventive measures to be taken:

Below are mentioned the 4 reasons for electrical interference, or noise in signal cables. Following each reason, mentioned are its preventive methods and pictorial representation of the circuit, depicting the same.

Reason: If a single data cable is carrying two signals, and if both the signals have the same returning path, than the voltage drop in one channel can transfer as noise into the other channel. This type of interference is known as Direct Electric Contact or Galvanic Noise. 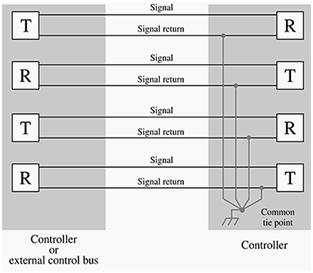 Prevention: As mentioned above, the main reason for galvanic noise is due to the interaction of a returning signal current with signals of other channels that are moving forward. As a result an error voltage is produced, generating noise in other signals.

This can be avoided by using different cables for the returning signals as shown in the figure. This will lower the impedance of returning signals on the other signals that are moving forward and as a result reduce the Galvanic Noise.

Reason: Electrostatic interference is caused due transmission of noise between various capacitances present in a circuit. As a result of high voltage noise frequencies between the wires in the cables, impedances are produced in the capacitances, paving way for noise to enter into the system. 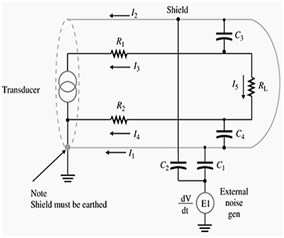 Prevention:It understood that electrostatic coupling is directly proportional to difference between the signal wires and noise source capacitances respectively. Hence, by reducing the difference between these capacitances by shielding signal wires properly, separating the noise source from the circuit, reducing noise voltage, and using twisted wires in place of the normal ones in the circuit, electrostatic noises can be prevented from entering into the signal cables. 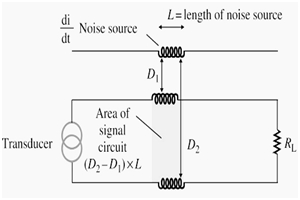 Prevention: One of the best and easiest ways to reduce electromagnetic noise in signal cables is, using ‘twisted cables’ in the circuit. When cables are twisted, a number of small loops are created within a single cable.

Reason: This type of noise in signal cables is often caused due to electromagnetic and electrostatic coupling effects in the signal cable. These coupling effects, owing to their noise voltages, induce electromagnetic radiations in the noise source nearby, producing RFI. Though these noises do not cause much damage to the quality of the signals, they may have considerable impact if the overall field strength is greater than 1 Volt per meter. 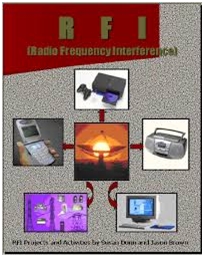 Prevention: RFI can be prevented by using an effective shielding technique. Iron shielding is one of the most prominent techniques used for this purpose. However, care should be taken to see that the cables are properly shielded, because ineffective shielding turns conductors into aerial receivers (attracting radio signals), further complicating the noise reduction process.

RFI’s can also be reduced by grounding the noise voltages with the help of capacitors (serving as shunts) to earth.

Though it might not possible to completely eliminate all kinds of noises in signal cables at present, they can largely be avoided by following the above mentioned preventive methods.

Do you have more tips to prevent noise in signal cables?