Preparing a load schedule helps in determining the amount of power required for an installation. This information is then used by electrical engineers to properly size conductors, conduits and determine the proper overload and other protection and control systems.

Let your fellow member A.N tell you about it and don’t hesitate to send us a mail if you want to be published in the blog too!

The load schedule, which should be done at the installation design stage, is determined through calculations. In some cases, this should be done with the future in mind, especially if there are foreseen additional loads.

Preparing the schedule requires a list all the equipment or loads together and all associated ratings and parameters.

Below are some of the typical steps that may be used when preparing the load schedule for an industrial plant for the first time.

Once you have the information, calculate the expected consumed load, operating load, peak and design load.

Consumed load: this is the amount of power equipment is expected to consume. The active and reactive power is calculated from the formula: 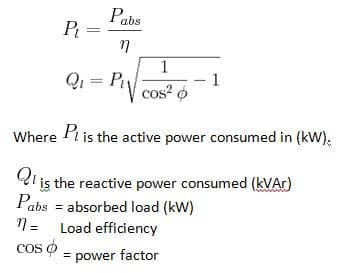 This can be done according to the load duty to find out the individual and total consumed load during intermittent, standby and continuous load.

Operating load refers to the expected power consumption during the normal operations and calculated from: 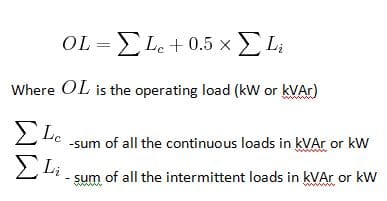 This is the expected maximum load that may occur during the normal operations. It usually lasts for a short duration, such as when standby loads are operated during testing of the systems, changing over machines or any other scenario that puts more stress on the installation. 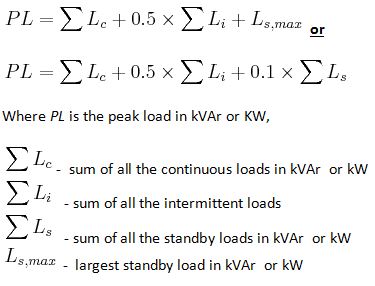 The design load is what is used for electrical studies, equipment sizing and calculated from whichever is the larger of the following 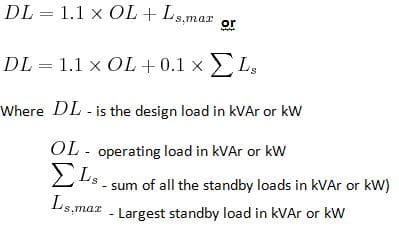 The design load is intentionally made larger to accommodate errors that may have occurred during load estimation, or due to additional unforeseen load which may not have been included during design phase. The design load should also be higher to cater for future load growth. This results to over-sized equipment to take care of the extra load. The peak load may sometimes be used for design purposes; in such as case, the design load is calculated from DL = 1.2 X PL.

A typical summary of loads is as shown in the table below: 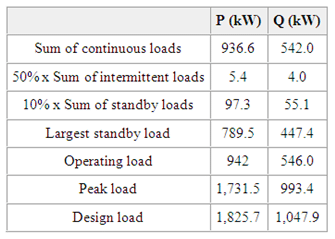 Benefits of a load schedule

It may be necessary to get the operating, peak and design loads for each circuit on the switchboard. The individual circuits are then added together to give the overall load for the system. Different load schedules may be prepared to find out the operating and peak as well as design loads for different classes of loads such as for the process and non-process loads, when in standby, intermittent or continuous operation. Further these may need to be prepared for situations when all critical loads are operating at peak.

Several other schemes may be evaluated under different conditions to determine the amount of power required and associated installation requirements. In particular, determining the peak critical load may be necessary in a medical facility, airport or any other sensitive installations. Determining this helps in selecting the proper backup generator or UPS.

A load schedule for different operating scenarios will show when peak consumption occurs and provide an opportunity to find out if all the high loads must operate at this time. Analyzing the process and non process loads can help design a power management scheme where only what is critical for the efficient operation is powered on during peak tariffs. The loads which can be scheduled to run during the off-peak tariff or when the total load is not as high can then be configured to do so as long as they do not impact on the production. This helps in spreading out the energy use and saving on the electricity bills.

In addition, it helps designers to properly size the power backup generators or other alternative power sources.

Thanks for reading,
A.N.

What’s your experience in the preparation and the benefits of preparing a load schedule? Write a comment below.