Hi everybody, our fellow electrical engineer A.N is one more time spoiling us with a nice article. Check his material below:

Connecting generators in parallel increases the power capacity, control in load management, ease of maintenance, and redundancy. The process involves the physical connection of two or more electric generators, and the synchronization of their outputs.

Redundancy: ensuring a soft power transfer as the outgoing generator is switched off and the incoming one is powered on. The design should avoid a situation where the load is not powered or allowed to run on the UPS.

Compliance with the electrical standards in terms of safely, protection and operation. 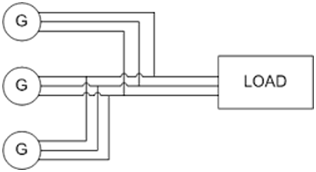 Requirements for connecting generators in parallel

Ideally, any type of a generator can be paralleled together with another type as long as their frequencies and voltage are the same at the point of interconnection. However, there are some practical limitations such as incompatibility between older and newer models or when the cost of making them compatible is not justifiable.

Among the things to consider are;

The easiest approach is to use similar generators or at least sets with the same alternator pitch, output voltage and frequency. Generators are said to be compatible when they share some properties such as compatible alternators, engines, speeds, load sharing controls, interfaces to other control and monitoring systems, etc

Paralleling generators with different characteristics is a bit complex. Apart from the compatibility issues, there are other system level problems the sizes.

If the sizes are the same, the system is capable of supporting a higher priority load in case of an emergency. However, if the sizes (in KW) are different, the maximum priority load is limited by the smallest generator; otherwise a higher load will overload the generator unless it is prevented from coming up. In such situations, the control is quite complex and might involve changing the sequence of operation. In addition, manual operation as well as dealing with failure modes becomes difficult.

The design should ensure that larger loads are dropped out first in the event of a failure of the bigger generator; this ensures that the smaller generator will be left with a load it can support.

This is the process in which the voltage and frequency of the generators are matched to provide a standard AC output waveform.

For the generators to be paralleled and synchronized correctly, each of the sets should have the below characteristics 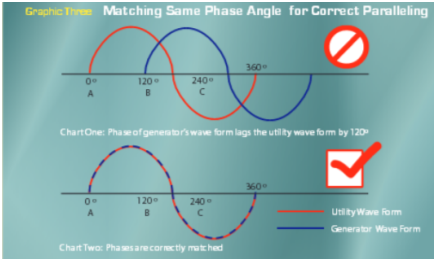 Low cost of power generation: Cost of generation increases with generator size and is more for ratings above 600KW.This is due to the fact that the market for smaller engines is higher, hence more are manufactures, resulting in lower cost. Using several smaller generators becomes more economical than a single large generator.

Decreased light loading of the generator prime mover: In most installations, the load varies from time to time and it is common to have a generator running at 30% of its capacity when the load is low. This may cause wet stacking. The efficiency of the prime mover is normally higher when the load is between 75% and 100%, and a light load means that the generator operation is inefficient. Using a smaller generator increases efficiency, hence a cost reduction.

Expandability and flexibility: The use of several generators makes it possible to supply a varying load without piling up costly units or spending too much on a big generator whose full capacity is rarely used. Generators can be added gradually as demand increases.

Setting up parallel generators is a complex procedure that requires a qualified electrical professional.

A well designed system provides backup power and a variable output. Using the correct paralleling switchgear helps the consumer to achieve the maximum output when the power demand is at its peak while providing the minimum output when the load requirements are low.

Thank you for reading,
A.N.

And that’s it! Did this article help? What more can you add about this topic?