I wish to present here the benefits of utilization and operation of MV/LV parallel transformers in electrical distribution. Having such experience, i will be interested to get feedbacks from other engineers. 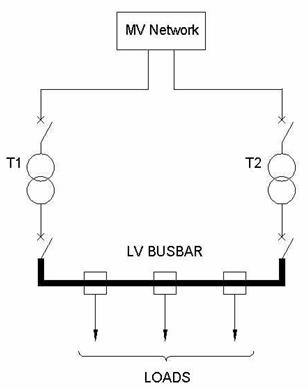 For all my experience, I’ve never met a working electrical installation, where operation of parallel transformers was used. Once, we used this solution in the design of welding shop, mainly to reduce the voltage drop in the network and maintain a stable level of short-circuit current. But the project was stopped by the Employer, and the idea was gone. Below is the list of benefits of such solution, as it is seen. It would be great if interested engineers commented and shared experiences on this issue.

1) Reducing the total capacity of electrical transformers (as compared to separate their work). The decrease of total installed capacity is reached:

4) Increasing the reliability of operation of protective devices in the case of phase-to-earth short circuits in the network.

Parallel transformers are allowed, provided that none of the windings will be loaded by current exceeding allowable current for that winding.

Of course, there are limitations for using electrical transformers connected in parallel. For instance, Russian Federation “Rules for technical maintenance of electrical consumers” allows operation of parallel transformers under the following conditions: