Hi, it’s Steven Mill, it’s been a long time but I wanted to submit an article about a particular generator… 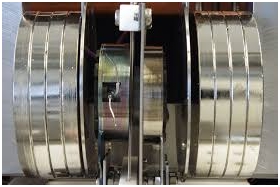 Scientists from Germany and the U.S have recently developed a thermionic generator which is capable of converting heat and light into electrical energy. This new invention is said to overcome the so called ‘space-charge predicament’ that stood as a barrier with previous developments of such devices.

The newly developed generator is far more efficient (at least four times) compared to its contemporaries, and is equipped with state of the art technology, that can convert solar power and heat generated from combusting the waste materials, into electrical energy. 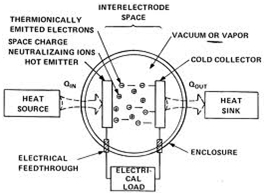 Thermionic generators are capable of generating electrical energy directly from the heat or light using the temperature difference between the two metallic plates installed inside the device, and separated by the vacuum.

As a result, a charge difference or potential difference (in electrical terms) is created between the two metal plates, generating usable electricity.

Constructing generators that can convert heat into electricity is under development since early 1950’s. Over all these years, development of such devices was seriously hampered due to space-charge problem.

In general, the metallic plates used in thermionic generator are separated by 3 to 5 μm. This distance used to act as a barrier for the charge (electrons) to move from the hot plate to the cold plate effectively, making the flow of the charge very slow. 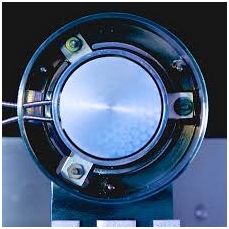 The reason behind this is, as one of the metal plates is heated, the evaporating electrons form a cloud like barrier while travelling towards the cold plate. In other words, electrons get slower as they travel longer distances, and at one stage they almost become standstill, thus forming an electron wall. More electrons coming from the heated metal plate reach this wall and get repelled. This repulsion continuous to take place till the so called electron cloud (wall) settles down on to the cold plate, which takes a lot of time to happen. Thus these devices were very ineffective.

Scientists have tried to reduce the gap between the metal plates to less than 3 μm, but found out that it is almost impossible to construct a generator with such a less space between the electrodes, and to operate high temperatures.

How Does The New Thermionic Generator Solve This Problem?

This is achieved by introducing a honeycomb shaped gate into the generator that has hexagonal openings in it. The electrons are driven through these openings with the help of the induced electric field. As a result, there is no electron cloud formation and there are no electron-electron repulsions. This has increased the efficiency of the new device by four times when compared to its contemporaries.

Hence, in the near future, when thermionic generators become even more efficient and cheap, every common household will be able to purchase one, and save money on their electricity bills.

Producing electricity using thermionic generators will also help us save valuable and scarce natural resources such as water and coal. Moreover, this will also help reduce global warming as well as green house emissions that are threatening our mother nature.

What did you think about this new generator? Do you really believe it has advantages or can you think of disavantages?