As everyone knows, the protection against atmospheric over voltages requires installing surge protectors the more upstream (as “main”) as possible of the low voltage electrical installation. This is in order to drive the power of lightning to the ground and avoid it spreading downstream.
But, it is often ignored that such protection is not always sufficient to protect the sensitive electrical equipments, especially when they are away from the upstream surge protector (“main”)
If the length of cable between the “main” surge arrester and the equipment to be protected is too long, oscillations and wave reflections may lead to tensions in the equipment; these tensions can be above the Up level of the same surge protector (until doubled up)

Next figure is : Voltage curve at the end of the cable depending on length of cable (front voltage =4kV/µs) 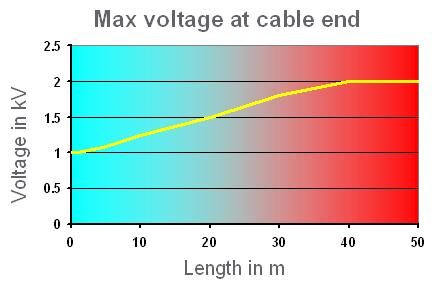 Maximum voltage at the end of cable

Why this phenomenon?
Lightning is a phenomenon whose frequency is of the order of hundreds of kHz to MHz. The voltage variations are very fast and we can no longer assume that the voltage is the same at any point of a cable. Oscillations due to the cable own resonant frequencies (parasitic capacitances, filtering) can be excited by the incident surge front

What is the best solution for a guaranteed lightning protection?

Generally for the voltage surges fronts encountered in a building, the phenomena of reflection are neglected for lengths less than 10m. Beyond 30 m, the risk of doubling the voltage becomes very important
The solution is to add a second surge protector (arrestor) as close as possible to the equipment to be protected
Flow capacity of this second surge device can be reduced (e.g. Imax <8kA (8 / 20)) because the lightning current has already been derived by the main surge protection device (SPD) 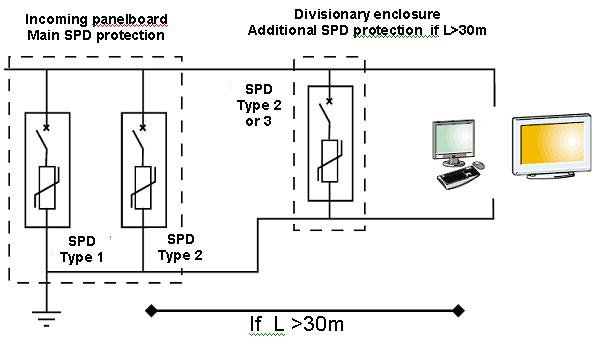