New article from your fellow electrical engineer A.N. Do like him and send us your essays by mail.

The electrical load scheduling is the process of estimating the instantaneous loads operating in an installation. The load schedule provides the load for the particular installation in terms of apparent, reactive and active power (kVA, kVAR and kW) and usually carried out at the sub facility area or at the switchboard. 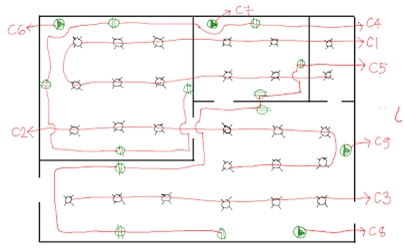 The load schedule preparation should ideally be the first task to perform during the electrical system design stage since it relates to the equipment sizes and other power system requirements. In particular, it provides information about the equipment ratings during normal and peak operations, thereby guiding the electrician in determining the conductor sizes.

Load scheduling is one form of load management action that allows companies to save energy by minimizing their demand. In order to have an efficient load schedule operation, the energy manager or business should conduct power logging and record all sessions so as to measure the usage of energy over a specific time. This enables the consumer to identify large loads that may be operating concurrently.

The need for load schedule

Preparing an electrical load schedule eases the work of designing the system in terms of equipment sizing as well as in power system studies. The process requires an understanding o the installation, all the equipment that will be installed, frequency of using the equipment and their importance or criticality.

The load schedule should ideally be started as early as is practically possible in the design process. One requires an idea of the main voltage levels required in the installation as well as all other details of the function of the facility or building, and the nature of process and non process loads.

There is no standard methodology and varying methods can be used based on type of installation and person carrying out the load scheduling exercise. However, there are some basic steps which are followed when creating the load schedule for the first time. This involves the collection of a list of equipment, their design load ratings, expected operating and peak power consumption.

Also required are some typical electrical load characteristics such a rated power, absorbed power, power factor and efficiency. The loads are then classified according to some specific criteria which may differ from one installation to the other.

The loads are mostly classified using three parameters, the first criteria is according to voltage; the other one according to load duty to show whether loads are standby, continuous, or intermittent. And lastly according to load criticality based on whether they are normal loads, essential loads or critical loads. The collected information is then used to calculate the individual and overall operating, design and peak power at continuous, intermittent, and standby load duty.

Traditionally, this has always been done manually, but there are now some software tools which makes it easier and more accurate.

Electrical load scheduling is an essential practice that an electrical technician should carry out at the initial stages of an electrical power installation. The load schedule provides data that is a close estimate of the amount of power consumed for normal and peak loads and anything in between.

The load schedule can help the electrical technician or designer to properly size the equipment, cables, control gear and protection systems accordingly. In addition, it can be prepared for different operating scenarios, including when there is a requirement for backup power systems.

Do you have questions or remarks? Let’s share below!