Light is so essential in our live, we can’t live without. Light affects everything on earth including plants, animals and also humans. We need light to grow plants, generate electricity (solar energy), for medical uses and for our living (in home, work & etc…) which is called lighting.

In the following paragraphs Yasser an electrical engineer who published few articles in this blog is talking about lighting design considerations and giving guidance for you to facilitate the lighting design process.

At first we need to define some necessary terminologies which is so important to understand the basics of lighting.

After having an overview about some basic lighting concepts we will now go through the design steps which are straight forward and easy to implement.

To achieve the optimum lighting design, many factors can be determined and clearly defined so the design meets the requirements and properly provide comfort and functionality for personnel.

Due to the variety of human activities, which require special considerations in order to meet the personnel comfort and satisfaction. These activities include working areas, homes, entertainment areas, open areas and etc… many factors of lighting design depends on the type of lighting to be implemented in a specific place, such as the luminaire type and shape, color rendering index, color temperature, lighting technology (LED, CFL), lux level and also lighting cost.

In the following we define the most common lighting types.

The amount of lux determines how bright the surface will be, the more lux means the more light and the opposite is true. Lux level differs due to the human activity in a specific place. There are many standards which can guide you to the optimum amount of lux.

An important note to be mentioned is when the lux level is so high or non-uniformly distributed, it causes glare and discomfort of who occupies the room.

It’s essential to choose the suitable luminaire and its reflector and refractor which affects the polar curve. From a decorative point of view, the luminaire should look nice in some specific applications such as meeting rooms, but we neglect this aspect in working areas and production lines halls.

Figure.5 Luminaire shape is not important in some working areas | image: standardpro.com

Also choosing a luminaire will require specifying light temperature and color rendering index (determines how colors will appear under a specific luminaire in comparison to the same colors under sun light) and the following figures shows the effect of CRI and light temperature.

One more thing we must specify is luminaire suspension type which depends on the ceiling type (surface mounted, suspended and recessed) and must be specified when purchasing the luminaire. 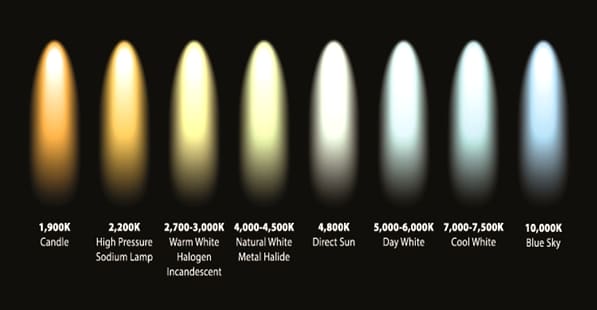 Number of luminaires and how they would be placed on the ceiling can be determined in many ways, the most primitive is the hand calculations, which give the configuration and number due to a specific equation, but there is an easier way by implementing the use of computer software.

One of the most common lighting software is Dialux, which is easy to use. The following figure show the output of Dialux project.

Finally, lighting design is easy and straight forward, but it involve many considerations and details which should be regarded, we have discussed some basics about lighting design which will help you to start but maybe you need some more details to get the optimum design, which may be covered in other articles.

Thank you for your attention, leave your comments if you want to!
Yasser