Now since Nasir did let us know that a circuit breaker is used as a safety device in the circuit, as it prevents an excessively large amount of current from flowing into the internal circuitry, let us have a look at the internal working of a circuit breaker with the next part of his tutorial “How does a Circuit Breaker work?”.

In order to understand its functionality completely, a complete detail of its internal structure and working principle is necessary, so that one is fully aware of how it works.

How excessive current builds up in a circuit?

Understanding the working of a circuit breaker is not that a complex task. Since its working is fairly simple, and the function is even simpler to define, so let us start with the basic principle of Ohms Law.

We know that when voltage is given to some circuit, a current is produced in that path. The load to which that current has to be supplied acts as a resistive network and offers some resistance to the current path, to limit the value of the current flowing, so that it can operate safely and do not cause any damage.

Excessive current only flows in certain conditions, when one or more circuit elements fail to work or work improperly, or any of the wire gets damaged and they short circuit the path of the current such that the power wire gets short circuited with the neutral wire and hence the value of resistance decreases and a very large value of current flows through the circuit which can cause damaging or heating up of the equipment or one or more of the circuit elements.

To prevent this larger amount of current from entering the circuit ahead of its path, circuit breakers are used. 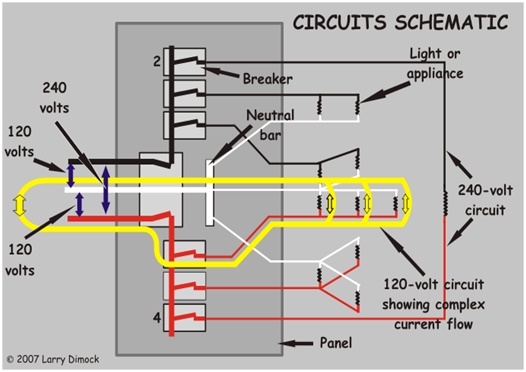 How circuit breaker stops this excessive current from flowing?

The working of a circuit breaker is more or less similar to a fuse, as far as the functionality is concerned.

But the difference lies in the fact that a fuse has to be replaced every time a large amount of current tries to flow through it, damaging its internal wire. So here lies the main advantage of a circuit breaker, that it absolutely needs no replacement.

To understand this concept, just consider its internal structure which is somewhat as follows: 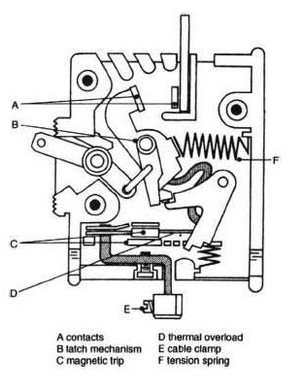 In case the current exceeds the safe operating range and becomes very large due to some fault in the circuit, the electromagnet will get energized and this energy will be sufficient enough to break the contact of the metallic strip from the fixed contact which is attached to the external circuit.

In this way the circuit opens from this point and immediately the current path faces an infinite amount of resistance and is unable to flow ahead.

When the current decreases back, the electromagnet is de energized and the contact is maintained again and the circuit operations safely. 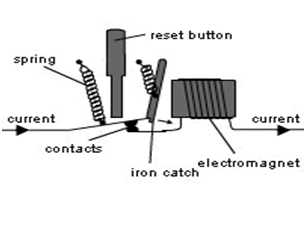 This was all about the working of the circuit breaker. In our next tutorial I am going to tell you further about the different ratings of a circuit breaker so that it becomes easier for you to decide which one to use.