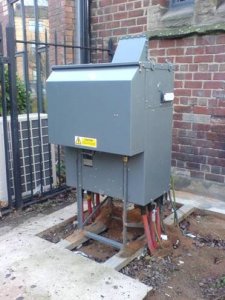 If we take the first argument I read in a previous article, that a fuse-switch is a cost effective solution, this is in fact a myth. In the past it was true due to the physical size of the old circuit-breakers.  Now, compact RMUs with dedicated circuit breakers and self-powered relays have the same life time costs as fuse-switch solutions and have far more useful features.

The main, or should I say only, technical argument for the fuse claiming high fault clearance speed is biased.  It is extremely unlikely that a 3-phase short circuit would occur inside the transformer without forewarning by a low magnitude fault, for example an inter-turn fault.  In this example a fuse would be unable to clear the fault, whereas a circuit-breaker works perfectly on something that is similar to an overload.  This is even truer in other countries, on networks having either isolated or resonant neutral systems.  Also, even on high magnitude faults, circuit-breakers function well, clearing faults quickly enough.

Self-powered relays are simple and easy to set.  Also, settings can be changed as the installation evolves.  This removes doubt over the selection of the proper fuse when replacement is needed either after a fault or for other reasons.

Upstream and downstream coordination is much easier with circuit-breakers.  Network management is better facilitated.  In case of a fault on the network, the overall time, including fault finding up to re-energising is reduced with circuit-breakers compared to the use of fuse-switch solutions.

More arguments exist but, I think it is enough to understand why there is a trend towards the use of circuit-breakers instead of fuse-switches.