Here is another article written by one of the member of the Electrical Engineering community. His last article was about Electric Generator Terminologies.

Hello friends, today’s topic, as the name suggests, is about generator ratings. I chose to share about this topic because when an Electrical Engineer is in field dealing with generators, then it’s very important for him to know the rating of under process generator otherwise he may cause a great loss.

Generator rating is a set of specified values which are specified for that particular generator model by its manufacturers. It must be capable of supplying that much power output in an accurate way that is anticipated by the manufacturer.

These ratings prove helpful while buying the product, to help in correctly selecting the machine that is needed by the user, depending upon his usage and requirement, he can choose the appropriate rating for his work. It also differentiates between the manufacturing companies and the efficiency of generators that the company produces and how reliably those ratings are fulfilled by those generators.

The thing that should be remembered is that the ratings of the generators are usually expressed in Kilo Volt Amperes i.e. KVA and this is conventional for all energy supplying devices as well, such as transformers and UPS’s as well. A motor is similar in construction and working principles to the generator, but it is rated in Kilo Watts (KW). This is due to the fact that KW represents real power whereas KVA represents the apparent power output of the device.

And as far as the energy supplying devices are concerned, their power factors depend on the load that is being attached to them, and hence the real power can never be predicted accurately. So in the apparent power, the power factor is approximately taken as one.

The conversion from kVA to KW can be represented as follows:

To calculate kV, the calculations can be performed as follow:

To make the understanding better, here is a table which shows the common kV ratings of a generator, and the calculated loads that can be afforded by them: 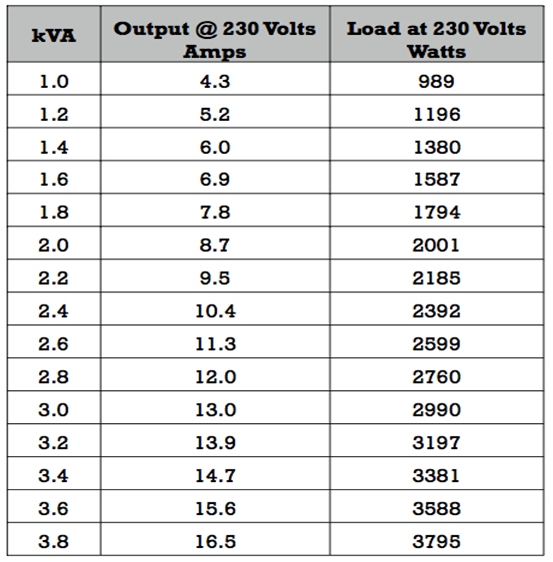 Standard rating definitions are set by the International Standards Organizations (ISO), so that the comparison between different manufacturing companies and their equipment become easy, when all have the same standard parameters. For the same rating, a generator can deliver more power at the output if used for a lesser time duration, than the one used for more time duration.

The standard definitions of some commonly used Ratings are given below:

The Generator set is capable of providing emergency power at times when no other source is available. Its power providing duration can be up to 500 hours for an entire year. The power factor for a stand by power rating should not be more than 0.7.

Prime rated power is capable of providing the power for an unlimited time period to a varying load. Overload is also allowed but only ten percent of the rated value and that is also permitted to only once in twelve hours.

This rating offers the option of a more varying load, but only with an average load factor.

In this rating, the generator can again provide a power supply for an unlimited period but only to a non-varying load. But the average output power comes out to be between 70 to 100 percent of the rated power output. The load should be “relatively steady”, which means that there should be no significant variations in it, otherwise the prime power rating could be a better option to consider. Also any overload capability is not available.

If a prime rated generator is applied to limited power ratings, then it can be used in a parallel with the utility, and can run for duration of five hundred hours in a year. It also does not allow the over load capability of ten percent of the rated power.

In the next post of this series, we will put some light on another type of generator, which is called Direct Current Generator. Direct Current generators are very rare to found but have unique applications. They are quite similar to synchronous generators in operation with slightest difference which we will see in detail in the next post.

Till then, take care and if you want to write an article for the ECC blog just like me, simply send a mail to the team.