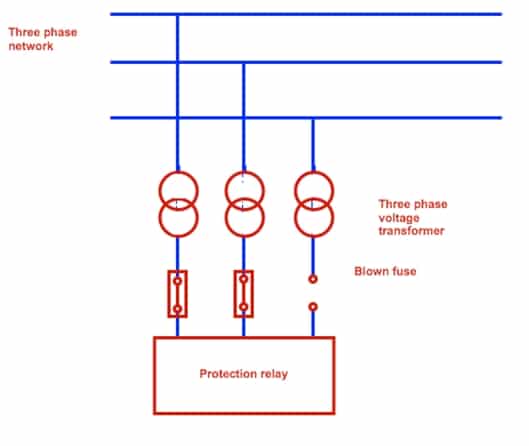 What is fuse failure supervision?

Fuse-failure supervision is a function used to supervise the operation of the fuses responsible for protecting the secondary circuit of the potential transformer, which delivers the reduced voltage to the protection relay and voltmeters.

In relay codes and substation automation, the fuse-failure supervision function can be identified by the following symbols,

Why is it used?

When there is a problem with the secondary circuit of the voltage transformer, which delivers an analog signal to the protection relay inputs, the protection relay will identify the problem as an undervoltage situation and could trip the circuit-breaker, so that’s where the fuse-failure supervision function becomes important.

How does fuse failure supervision work?

The decision to send as a signal to block the voltage protection functions is done by a processor, and based upon two different sets of logics.

The second logic method is based upon the current & voltage delta function method. In this method, the rate of change of voltages and currents is continuously being checked, delta (change) values are calculated. The calculated values are compared with the set values for the current and voltage change rate settings.

How can one distinguish between if the line is broken for some reason or if there is a blown fuse?

This issue is easily overcome by using a normally closed contact with the miniature circuit-breaker or fuse holder. This contact signal should be received in the protection relay as a binary input, which will be programmed to display “VT fuse healthy” for example and when a fuse is blown, the LED should display something like “VT fuse failure”. It could also be simpler and just be seen as a light indicator such as a pilot lamp.

In this article, the fuse-failure supervision function was introduced, and the purpose of using it was elaborated. Furthermore, the two algorithms for detecting the fuse failure were discussed and finally, a method for distinguishing between the failure of a broken line and a blown fuse was discussed.

Your thoughts on this article?