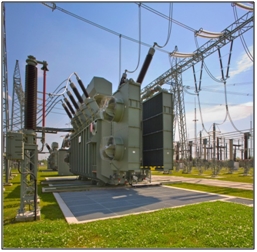 Ferro resonance can be described in simple terms as a disturbance caused by high voltage level leading to overvoltage and also due to distortion of overcurrent.

In the process ferro resonance, all the oscillatory processes which occur in an electric circuit are included.

Non-linear inductance, a capacitance, a voltage source and low losses are the oscillatory processes taking place in the electric circuit.

The presence of ferro resonance may result in the occurrence of certain oscillatory processes which may damage the electrical power system.

There are a number of factors which cause it, the causes being difficult to compute. However, the result of this process is extremely severe in damage.

This process has been under consideration for the whole of the last century but in present times has become of grave importance especially in electrical facilities. Research regarding this phenomenon has also increased in the past few years.

Enhanced utilization of underground cables in primary circuits, along with single-phase operations, low loss transformers are among the lead causes of ferro resonance.

There is not a specific control measure which can be adapted to deal with ferro resonance instead each specific situation requires a specific treatment.

There are many solutions which can decrease ferro resonance process to take place, the first and foremost being to stop it from appearing in a system all together. This can be easily achieved by checking the configurations of the electrical system which are most likely to cause ferro resonance in the system.

Ferro resonance in power transformers as an example

When magnetizing reactance of the core enters and leaves the saturation phase it reverberates with the line capacitance and as a result ferro resonance is produced.

Potential transformers are a type of instrument transformers which are commonly used to produce voltage which is then used by the relays. 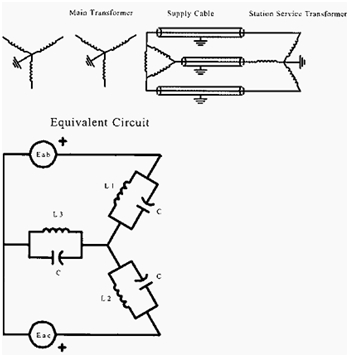 But still it is important to mention this process because once it occur it can completely damage the transformer, leaving it out of order.

In the figure below, a circuit is shown which is likely to produce ferro resonance in the system. As shown in the figure, a distribution type station-service transformer, composed of Y primary winding, is supplied by a Δ-connected tertiary winding which in turn is part of a big three winding substation transformer.

A set of shielded cables serves to connect the supply lines from the three-winding sub-station transformer to the station-service transformer.

Considerable amount of phase-to-ground capacitance may appear in the cables if they are very long.

The three inductances, L1, L2 and L3, have an instantaneous value which is known as the instantaneous inductance value. These values, at any given time, are in direct proportion to the effective penetrability of the core.

The inductances are in parallel arrangement with the capacitances and combine to form an L-C circuit. All the three L-C circuits are in series with each other and also the voltage sources. 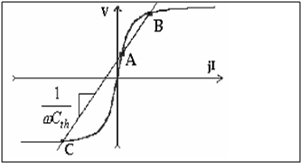 As, the effective permeability of the core varies, the inductances also vary because of the direct proportionality. Thus, during every cycle for a short duration, a series resonant condition exists in the circuit.

This short duration series resonance results in movement of large voltages through the L-C elements. This sudden increase in the voltage to a large amount may damage the transformer gravely including the equipment attached to the transformer.

Introduction of a Δ-connected secondary wiring to the above circuit can help deal with the ferro resonance.

Increased flow of voltage across the wiring is prevented by stabilization of the neutral point of the Y-connected primary winding. This stabilization is achieved by the Δ-connected secondary wiring which nulls the vector sum of all three voltages of all the phases.

So, the presence of Δ-connected secondary winding helps eliminate the chances of occurrence of ferro resonance.

There are many factors that lead to the establishment of Ferro resonance in power systems.

As mentioned earlier in this article Ferro resonance can have adverse effects on the equipment used in electrical power system.

Future research is required in this field to grab better understanding of this phenomenon so that Electrical transmission & Distribution companies could be saved from heavy amount of losses as a result of damaged equipment each year.

Before any new system is installed detailed study must be conducted by engineers so that Ferro resonance could be avoided. The simplest solution in this case is to add resistive load to the system.