Europe is investing in its ambitious project using the available resources. Their plan is to put in place the infrastructure and market conditions so that the electricity generated by offshore projects can be fed into grid and brought to where it is needed. 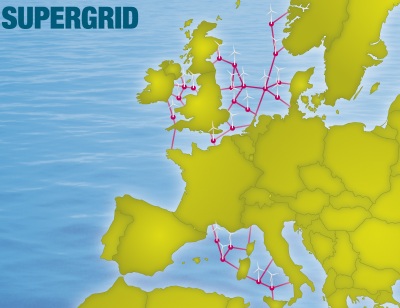 The North Sea is an ideal and fantastic resource to produce renewable energy which can serve the entire region said Alex Murley of RenewableUK group, who is familiar with the project. The plan is to use proper resources available in ample quantity as per geographical conditions such as using offshore wind for northern part and sunlight for southern part.

Wind energy will be generated in north Europe and solar energy will be generated in the south Europe. This offshore development would be combined with an improved onshore network, a more uniform system of grid management and interconnecting High Voltage Direct Current (HVDC) cables between countries namely the UK, France, Denmark, Netherlands, Germany, Ireland, Belgium, Norway, Sweden and possibly even down into Spain and Portugal.

(This article is based on the article  ‘European supergrid slowly coming into focus‘ published on ‘Renewable Energy World’.)