New article / essay by Muhammad, one of our dear senior electrical engineers. With more than 30 years of experience, he sometimes spoils us with great and original articles just like this one.

If you’ve ever wondered what your grandchildren will use between AC and DC, well enjoy your reading! Don’t forget to give your opinion in the comments section.

My first Encounter with Electricity

As a child I came from my village to visit relatives in Sialkot city (in Punjab, Pakistan). There, for the first time, I saw electric lights which would glow on the press of a switch. That was my first encounter with electricity. (Please do not conclude that as happens in many stories, which became the reason for my getting engaged in the electrical engineering profession).

I also learnt that the power was AC, and that Sialkot had earlier had a DC power house run probably on thermal power fed with coal. I knew nothing about AC and Dc because at that time I had not reached class six and knew nothing about a,b,c, the English alphabet.

Later, when I became an electrical engineer I could interpret that information to say that Sialkot gave up DC power to run on AC. Of course, AC was not generated in Sialkot but transmitted from somewhere else.

Transformation is an Advantage

That precisely was the advantage of AC over DC. It could be transported to far off locations much more economically.

The earliest electric supplies to homes in Europe were DC, and those too at a low voltage to suit the incandescent lamps available. With time, and development of technology, voltages changed; ultimately AC mains became universal, although with at least two different standards being adopted.

However, times change (Does it mean the universe is AC?). Now we are wondering what type of mains voltage will your children or grand-children have in say, year 2050? 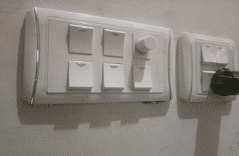 Will the switchboard of year 2050 carry AC or DC?

What gave supremacy to AC was the transformer, the quietest and the most efficient machine (as some electrical engineers call it- mechanical engineers would nominate the lever, I think).

AC dominated because the step-up and step-down transformer permitted efficient transmission of high powers over long distances. But that advantage is not very clear now. High power transmission is shifting to high voltage DC (HVDC) for the same very reason of efficiency.

Siemens have installed a 100Km HVDC line between the Pennsylvania/New Jersey power grid to Long Island. China has been transporting since 2004, power from the Three Gorges Dam to its Guangdong province via 940 Km, 540 KV bipolar line. Static converter / inverter stations at both ends make the transmission a simple matter.

Yes, and it the advent of static inverter technology which is also boosting use of DC. DC to DC converters now abound making used of various devices directly on DC.

The number of devices using DC at home and business is also on the increase. Low voltage DC (LVDC) utilize voltages from 5 V for the telephone battery charger to 1500 VDC for the Urban railways in some countries.
In between are the 9V toy and instrument battery, the 12 V battery for vehicles, lighting, and horticulture lighting, 24 to 36 V for the electric bike and cordless tools, 400V for data centers, hospitals etc.
DC-inverter conditioners are closer to DC than AC, and thermoelectric pumps (using DC) are trying to catch up with the efficiency of the conventional air conditioners and refrigerators.

The hybrid vehicles use batteries with voltages ranging between 250 to over 300 V, which is then inverted to nearly 600 VAC for the motor, all within the small space in the car. Semiconductor invertors and converters easily service all such devices from a single supply line.

What Will Your Grand Children Use?

The need for clean power has driven the world towards renewable energy sources. Solar energy is DC by nature, and any other sources, being intermittent, demand storage capacity which is primarily DC. Renewables are particularly suited to far flung areas, and some homes in developing countries are run entirely on DC, or mostly on DC.

There is also the question of health and safety hazard. AC lines do radiate. And equivalent AC levels are thought by some to be more lethal.

The subject area is vast and changing, and I invite the opinions of my learned colleagues on what form Household mains will take around year 2050.

Thank you everybody for reading,
Muhammad.