Hi everyone, a member of the community named Manish sent us an article about Electrical Earthing/Grounding. Remember you can send us articles by sending a mail to the team.

Electrical earthing / grounding is one of the most important aspects of any electrical installation. Earthing or Grounding is a technique which is as old as the use of electrical power on a commercial scale. The practice came in to existence in the early days of electricity when the systems in use were all ungrounded and that led to frequent hazardous incidents caused due to electric shocks.

The term Earthing or Grounding simply means connecting the electrical system / equipment to the ground by means of a suitable conductor. Such a ground connection provides a common return path for safe discharge of electricity to the ground.

a) It prevents from the risk of electrical shocks to any human being coming in contact with the system.

b) It protects the connected equipment from any possible damage occurring due to leakage currents or lightening or voltage surges, by providing a safe passage to these currents to ground.

Earthing of an electrical system is achieved by inserting an electrode (plate type / rod type) in to the solid mass of earth and then connecting this electrode to the earth wire coming from the electrical equipment.

While it is easy to understand the definition of Earthing, the topic of Earthing and its application in practice is often the most misunderstood of all. It will therefore be worthwhile to explore some points about the basics of Earthing:

This type of system is not in practice anymore. However, it will be worthwhile studying it beforehand. In an ungrounded system, the current flows from source to the load and returns back to source and complete the circuit. There is no point in this loop where the system is grounded. Due to absence of a ground connection, there is no way a fault current can pass out of the loop. (See fig below:) 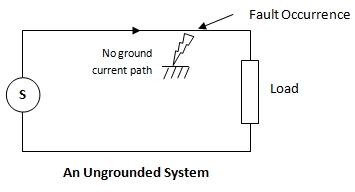 In case in the event of any abnormal fault current, there will be occurrence of first fault by causing insulation failure at some point in the circuit. Due to ungrounded circuit, this fault will remain undetected and may lead to subsequent second fault and a possible short circuit and thus cause a severe hazard to the whole circuit and it will break down.

The solution to above issue of ungrounded system is provided by a Neutral Grounded system. This system avoids the risk of developing the first fault and eliminates subsequent risk of short circuiting due to second fault in the circuit.

In this type of grounding, one of the poles of the source is connected to the ground mass. This is also called “Neutral”, while the other pole that carries the charge to the load is called a “Phase”. The neutral conductor always carries the return current from the load.

It should be noted that in this particular type of system, the Neutral is always providing the return current path from load to the source. Hence for the same reason this conductor is always insulated from the ground. Due to this important function, the degree of insulation will also be same as phase conductor.

Grounded At Customer Side

In the previous section we have seen Neutral Grounding done at source side. This type of system although fine, but may not be adequate in practical situations where source is at a significant distance away from the load. In such situations, the fault current arising at fault point and travelling through the Neutral conductor would not be grounded at the nearest grounding point and hence the risk of damage to the electrical circuit would still be present.

This type of earthing not only protects against insulation fault, but also protects the metallic body of the equipments from any potential electrical shocks.

Please note that in this type of earthing, the neutral of equipments on customer side are Unearthed. The neutral is grounded only at source.

In above sections we covered basic types of Earthing system. There are different categories of systems arising based on combination of neutral and ground reference. We will study them in detail in next article.