Hi fellows, here’s an article from Pablo M. who’ve already wrote for us in the past. Enjoy and ask him questions if you want to :)

Hello it’s Pablo,
This time I will share with you the most common problems and mistakes found in the installation of compression connectors and how to avoid them. Note that this is a summary since full training is needed to ensure proper connection.

Bow refers to the curvature may occur in a compression connection after being installed. Bowing is sometimes caused by the natural curvature of the conductor (caused by storage on a reel).
During the compression process, the compression material enters into a “plastic” state and can be easily influenced to bend with little force.

A lot of compressions on the connector may cause excessive bowing. Broken dies is another cause. Therefore, if no opposition, the conductor shall tendency to bend causing the appearance of a curvature in the final connection.

There are two (2) ways to reduce or eliminate bowing: 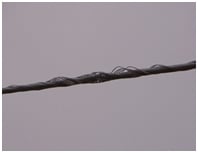 The bird cage effect refers to the separation of the wires of a stranded conductor at the input of compression sleeve. This phenomenon occurs when two (2) or more metals with different physical properties are extruded together, such as in the process of installing a compression connector when the connector sleeve and the conductor are not the same.

The result of the different rates of extrusion is uneven plastic deformation, and when a material is a stranded conductor, the individual strands can be separated.

The bird cage effect has no detrimental effect on the global connection. However, it is desirable to minimize or eliminate this condition to avoid areas that could produce crown or make an unequal distribution of power out connection.

One of the methods used to remove the bird cage is to use a connector designed to be compressed from the outermost position. This type of compression connector should have holes to relieve pressure in the center of the handle; this is to allow the exit of excess rust inhibitor.

Do you think that the above connections are made right or wrong?

The best job that anyone can do when brushing a conductor to be electrically connected, is cleaning the outer surfaces of the outer strands of the conductor. Internal threads are covered with oxides and cannot be removed without unraveling the conductor.

Some inhibitors are provided with oxide particles in suspension which have conductive characteristics such as zinc or nickel. The function of these particles is drill through the oxide covering the inside of the strands of the conductor and make contact with the clean metal between each strand.

The particles act like little shunts, which connect the inner conductor strands between them, and their outer strands. This allows more strands to participate in the current transport thereby maximize the efficiency of the connection.

However when this compound is not used the following problems appear:

Finally I want to mention that the best practice will always be prevention to avoid possible damage to expensive equipment such as a power transformer.