Again, one of you sent us an article for it to be published on the blog. We wanted to let you know that we appreciate your committement to this community.

We’ve received this essay from Yasser, an electrical engineer from Egypt. He’s interested in all electrical engineering subject and Business related subjects and if you want to be published on the blog, you can of course send us a mail. We agree to post any type of writing!

It’s clear that one of the most common electric businesses is electric distribution for residential, commercial and industrial buildings. And as a rule of thumb all residential buildings have three-phase wye supply and also nearly most of small commercial and industrial facilities. Speaking about wye connection we expect that all three phases have about the same amount of current and the neutral have a very little current, this case is called a balanced system.

Cases in which the neutral cable carry current

Usually in commercial and residential buildings most of loads are single-phase but the main feeders to the building are three phase. So phase scheduling is done to balance these single phase loads on the three phase supply so we have a balanced system.

As living style changes constantly so loads also changes, just imagine that many of your neighbors install new heavy duty appliances like air conditioners and assume the added loads is on phase A only. Now our system is not balanced anymore Thus the neutral cable will have high amount of current due to the vector sum of all currents is not equal to zero.

Power electronics devices is a double edged sword, it made life easier in many fields for example power supplies, variable speed drives and also computer devices. These devices are considered as non-linear loads and its current contains a lot of harmonics.

So if we have a zero sequence component equal to 30 ampere then the neutral will have 90 ampere current, which maybe lead to overloading it. 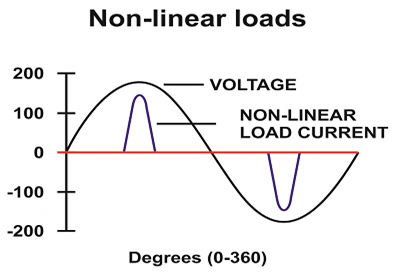 The effect on neutral cable and solutions

1. Usually in electrical distribution for residential buildings, the cross section area of neutral wire is half of the hot wires. So its current carrying capacity is smaller and surely won’t be able to carry as much as the hot wires’ current.

In case of unbalanced loading, the neutral wire will have amount of current passing through it. If this current is higher than wire capacity then it will be burnt and we’ll have power outage till neutral wire is replaced.

Now we have two ways to fix and prevent this problem to arise. The first is to size the neutral wire as same as hot wires, and this will reduce the possibility of having the neutral overloaded and burnt. Second way is to reschedule the loads and balance it on the 3 phases then neutral current will be nearly zero and this is optimal case.

2. In industrial and commercial buildings we find the common loads are motors which requires variable speed drives and many computers which are sources of harmonics, that’s why the neutral is always full wire. And with the presence of zero sequence harmonics the neutral will be overloaded and maybe burnt.

Solution for such case is to use filters to act as high impedance in front of harmonics current and so neutral current will be nearly zero and no harm happens.

It’s obvious that continues monitoring for your utility is a recommended behavior to check the load balance and measure the level of harmonics and its current value to keep your utility safe and prevent discontinuity of service as much as we can.

Any questions or remarks? Let’s share below in the comments area.