Hi community! We’ve already dealt with Earth Leakage Circuit Breakers 3 years ago, but today here’s a new article from our fellow member Manish about this topic, which is refreshing. Hope it will help! If you have questions, leave a comment. 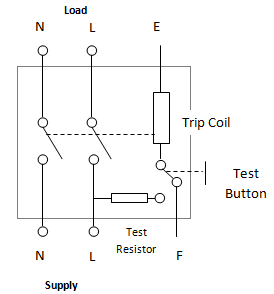 In my last article I told you about Residual Current Circuit Breaker (RCCB). Today we will take a look at another important type of circuit breaker called – Earth Leakage Circuit Breaker (ELCB). An ELCB is another different class of Circuit Breakers with a specific function.

An Earth Leakage Circuit Breaker is a safety device used in Electrical circuits with high Earth impedance to prevent the risk of Electrical shock. Unlike previously studied RCCB, an ELCB is a voltage operated device.
ELCB detects small stray voltages across metal enclosures of electrical installations and interrupts the circuit if the voltage level exceeds danger threshold.

Earth Leakage Circuit Breakers were invented almost 60 years ago and once quite widely used in electrical installations. However, since the invention of RCCB – an improved protection device, the use of ELCBs has come down.

Thus, the main purpose of ELCB is to detect Earth leakages and prevent injury to human beings from electrical shocks.

ELCB : how does it protect?

Although use of ELCB is taken over by current operated RCCB, it is interesting to study the working principle of Earth Leakage Circuit Breaker. Figure 1.0 below depicts the schematic of this device.

During normal operation, the double pole switch is closed and the current flows from supply to load side through the two lines (Phase, Neutral). During this period, there is no current flowing to earth between terminal F and E. Therefore the voltage between terminal E and F is negligible (almost Zero).

In case of a fault condition, the voltage on terminal F connected to exposed metal work rises up and the voltage at terminal E is at zero potential. Thus, there rises a potential difference between terminals E and F. This causes the connected trip coil to operate. The movement of trip coil then opens up the double switch and thus breaks the circuit.

There is a test button seen. It is used to test the operation of ELCB. When it is pressed, it temporarily connects the terminal F to line via test resistor. It disconnects the supply back to metal enclosure so as to avoid dangerous electrical current back to the metallic enclosure.

Advantages of ELCB over RCCB

One major advantage of ELCB over RCCB is that it is less sensitive to fault conditions over RCCB, hence it has less occurrences of nuisance tripping.

ELCB although offers a good protection against earth fault, has some limitations and drawbacks that makes it more attractive to go in for RCD, that are mostly used nowadays.