Since Febuary 2013, one of our members has been submitted a series of articles about electric generators. Today, this is the last part and it is about Direct Current Generator.

If you want to contribute to the community and write a short or a long article for the blog, simply send a mail to the team.

Most of our everyday appliances work very well on the AC power output that is supplied to them, but appliances which involve big motors and need a large current supply, such as those used in industries and factories usually need the DC power. For this purpose we introduce the process of commutation in an ac generator, so that it can convert its AC output to a dc supply.

Advantage of DC power over AC

The advantage of a DC power over an AC power output is that dc power provides a continuous output due to which the speed of the motor turns out to be very fine and smooth. No fluctuations occur. But in case of ac generator, we cannot utilize this feature.

Construction of a DC generator

In construction, a dc generator is similar to a motor, or even an ac generator, with the addition that slip rings are replaced by split rings. Its three main parts are:

We have already studied that an electric generator uses Faraday’s law of electro-magnetic induction to generate the required voltage. So here we are going to see that how this voltage is converted into a dc one. 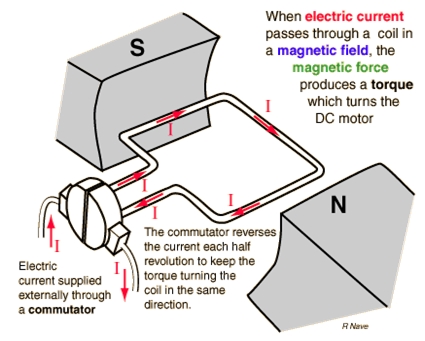 Commutation is the process of converting ac power into dc power. The set of rotating split rings and the carbon brushes to which they are attached is called the commutator. The carbon brushes help in leading the current produced, to the external circuit.

The position of the metal brushes is adjusted in such a way that the connections of the coil to the external circuit also reverse when the coil completes half of its rotation cycle. In this way the direction of current through the external circuit also remains the same even when the ac had to reverse its direction of emf, since the commutator has reversed the polarity.

This process is visible in the figure below:

This shows that even when the coil has turned its side, the direction of current in the external circuit is still the same. To closely observe the phenomenon that how split rings do this, we can see it in the following figure: 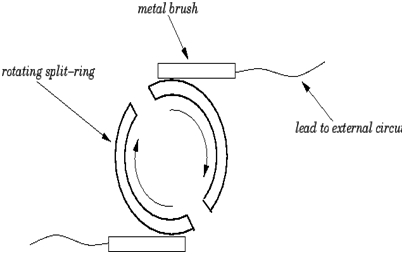 As a result we get a constant polarity dc signal at the output, whose wave looks something like this:

What you guys thought about this Direct Current Generator back to basics article?