Hi this is Steven Mill! I’m back with a back to basics article about condition monitoring of the transformer. Hope it will help y’all!

In this article, we will discuss several techniques used to monitor the condition of the transformer. Those techniques are:

Acoustic Monitoring of the transformer

It is clear that if the load of the transformer increases, the noise will also increase. Hence several measurement is needed to monitor transformer’s performance by measuring the noise such as [1] :

Infrared monitoring is the method to measure the performance of the transformer by detect the hotspots that occur because, for example, improper cable connection or winding failure. 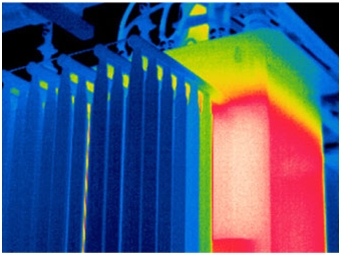 Whenever oil transformer experience abnormal thermal, electrical stress, and other faults, several gases are produced due to decomposition of transformer insulation oil. When the fault is major, the production of the decomposed gas are more and they get collected in Bucholz relay. However when the faults are not significantly high, the gases will get enough time to dissolve back in the oil. Hence it is necessary to analyse the quantity of different gases dissolve in transformer.

By using interpretation technique (Key gases, gases ratio, or data mining) we can deduce fault indication by interpreting the DGA tests result. The fault that could be detected by DGA tests are:

This method is developed in order to overcome DGA insensitiveness when lower temperatures (100 to 1300 C) are concerned. The method correlates well with cellulose aging determined from Degree of Polymarisation (DP) measurements [2].

DP measurements represents the length of the cellulose chain while HPLC identify the presence of furanes and furfurans, created as the length of the cellulose chain shortens, as part of the aging process.
HPLC has been found to be sensitive in detecting aging at relatively low temperature and to provide strong evidence of aging when transformers have been overloaded [2].

A partial discharge measurement consist of:

Frequency response analysis is used to detect fault of the transformer, particularly to determine the displacement of the winding.

Any electrical equipment always consists of resistance, inductance, and capacitance RLC that is a function of frequency. The RLC impedance versus frequency characteristic is then used to assess electrical and mechanical condition of a transformer. Laboratory test have demonstrated the sensitiveness of this technique.

FRA is normally used to analyse [1] :

Option require that FRA has been previously performed on the transformer, whilst option b and c doesn’t. 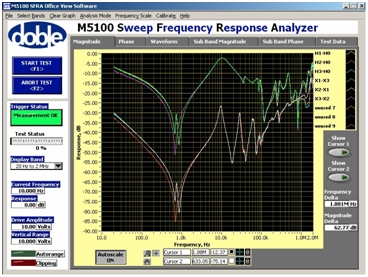 However, the fact the measurement is an overall quantity for the winding and therefore it is practically impossible to determine whether there is a problem of the whole winding, e.g. contamination by sludge or carbon deposit, or localised fault.

Power factor test is performed by applying voltage and measure the leakage/loss current of electrical insulation [3]. The leakage comprises of two components: 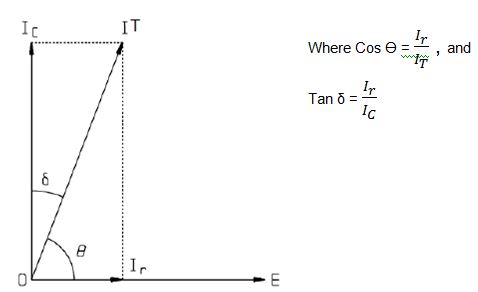 This technique is used to measured water content in the paper in an oil-paper insulation system and is increasingly being seen as a more reliable indication of dryness of the transformer than moisture in oil measurements.

The test is performed by charging the transformer dielectric by 2000VDC voltage for a particular charger time, discharged for half time, and then the peak and initial slope and the recovery voltage are measured. The dielectric is then fully discharged before a new measurement is made for a different charge time. Measurements can be made for charge times from 20ms to 5000s. The condition of the dielectric is characterised by the dominant time constant for the peak recovery voltage and by the characteristic slope of the initial slope versus peak recovery voltage plot [1].

However there is uncertainty of the results if the test is performed in a few very old transformer as oil acidity and paper degradation can complicate the result.

This test is performed to check the transformer winding, terminal connection and tap changer, and also to calculate the load loss value. Loose connections and high contact resistance can initiate increasing levels of ethane and or ethylene.

Winding resistance can be measured using micro-ohmmeter. The results then compare with factory measurements with a correction factor is needed. The following formula is used to compare the result:

Additional core ground can be detected by DGA. However, core insulation resistance is performed when the winding resistance shows that all of tap changer and connection contacts are in good condition whilst DGA test show significant proportion of ethane, ethylene, and possibly methane.

The following table show the condition of the core insulation resistance for different measured readings [4]:

Thanks again for reading me!
Steven Mill

Did this article helped? Do you think it lacks information? Tell us in the comments below.