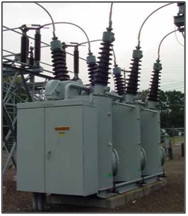 Power failure or a short circuit in the system can occur at any time. It may not even give us the chance to turn off the appliances connected. This may sometimes lead to heavy loss because the faulty current passing through the electrical network system may damage the electrical equipment. So it is important to get the current out of the system as soon as possible.

For this several switching systems are to be implied so that not only the current causing disturbance is removed from the network but also that the appliances get the current so as to cause minimal loss.

For the switching purpose circuit breaker is one device that is being used. Circuit breaker is a device which can work both manually and automatically. It is required widely to protect the electrical appliances from harm. Care should be taken during the designing of the circuit breaker as the power systems we nowadays employ use huge amounts of current.

1. One way is to compress the ionized arc medium. This is one way to accelerate the de-ionizing process of the medium.

2. Another way is to cool the arc medium as through this the resistance of the arcing path is increased.

3. The third way is to renew the gasses of the ionized arcing media.

Deformed metal spring, compressed air or hydraulic pressure is the way through which the potential energy is stored in the circuit breaker. It is only during the

operation of circuit at the reception of a switching signal is the potential energy released causing the moving contact to slide at a speed. 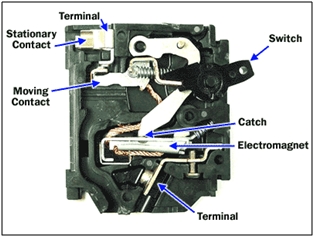 Attached to the operating mechanism of a circuit breaker is a plunger which is moved when a switching signal is received.

Due to this the stored potential energy is released in the form of kinetic energy which is the driving force of the moving contacts which are connected to the operating mechanism through a gear level arrangement.

Circuit breakers have been divided on the four following basis:

The circuit breaker classes have been further divided as follows:

Arc is known to be the glowing current seen moving between the contact paths of the circuit breaker. The glow which is observed is due to the fact that the current is flowing without any resistance in its path because the medium in between the opening contacts get immensely ionized on the opening of the current carrying contacts. The process is observed even when the contacts are separated from each other.

Role of Arc in Circuit Breaker 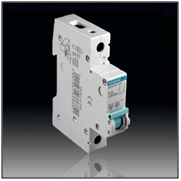 An arc is established in the circuit breaker when its current contacts open up because of too much power. The arc acts as a conductive pathway for electricity thus the arc faces close to zero resistance and continues to flow and thus the circuit breaker is not disturbed.

The arc needs to be quenched as quickly as possible so that the flowing current in the circuit breaker can be interrupted. Proper technology and mechanism should be applied for the quenching purposes so that it can be achieved safely.

The ionization of gas can take place in two ways:

In Thermal Ionization the temperature of the medium is raised as a result the collision of gas molecules with each other increases. Due to the collision some molecules break to form atoms. If the temperature is further increased the valence electrons get excited and leave the atoms leaving them ionized. Because of this ionization electricity is conducted by the free electrons and this situation is known as plasma.

The ionization of the gas through the electron collision happens in such a way that the free electrons present in the gas medium is subjected to electric current. They tend to move towards greater potential and consequently gain velocity. Now when these free electrons, moving with speed, collide with each other and remove the valence electrons from the atoms which would otherwise be not possible when not accelerated.

This article contains information on circuit breaker switching only, but a detailed topic around arc modeling will be soon published as a second part.