Last week, an electrical engineer with 14 years of experience in oil and gas, energy, mining and teaching sent us this back to basics type of article on Capacitor bank switching. Say hi to Carlos!

We thank him dearly for participating in the blog and if you too want to help us keeping this blog alive, send us your propositions of articles by
mail.

The continuous growth of the electricity demand in the heavy industry, regarding the installation of large motors in the system, involves the increase of the reactive power consumption due to the typical power factor in steady-state and during the motor starting (PF: 80% and 20% respectively).

As a result of this situation, the transmission and distribution system undergoes low voltage profiles, as well as losses in transmission lines and power transformers. An adopted solution by the Grid Operators has been to install capacitor banks, as a local reactive source, whose benefits are the decrease of the reactive consumption and electrical losses. Furthermore, operating voltages in the power system increase.

However, when capacitors are switched, the power system faces transient overvoltages, which theoretically could reach peak values phase to ground of aproximately 2 p.u. This situation could be aggravated when other capacitor banks are located in the same power system.

In addition, it might even occur transient overcurrents of great magnitude and high frequencies which are able to exceed considerablely the nominal current of the capacitor bank for some milliseconds.

As stated before, the capacitor bank energization produces voltage and current transients. When switching a single capacitor bank; the amplitude and frequency of the energizing current depend on the short circuit level at the point of common coupling (PCC) where the bank is connected. Assuming that the three phases close simultaneously and the capacitor bank is completely discharged, the oscillation frequency usually reaches magnitudes from 5f0 to 15f0 (f0: frecuency of the system)

In terms of the current transients, they are not usually important because of the fact that the amplitude and frequency are limited by the system impedance. On the other hand, with no charge trapped in the capacitor and considering that the terminal voltage cannot change instantly, the voltage transients caused by the switching of a capacitor bank will produce an abrupt decrease of the terminal voltages to zero and then the capacitor charging process starts through a low frequency oscillation.

In Figures 1 and 2 are shown a model of a substation in a power system in ATP and the voltage at the busbar and the current in one capacitor when it is energized (Phase “A” crosing by Zero). 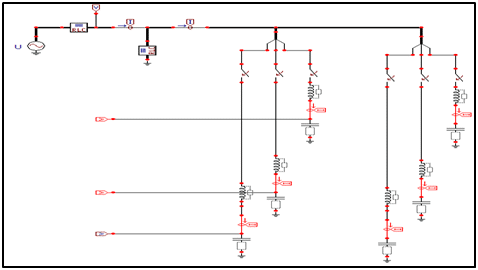 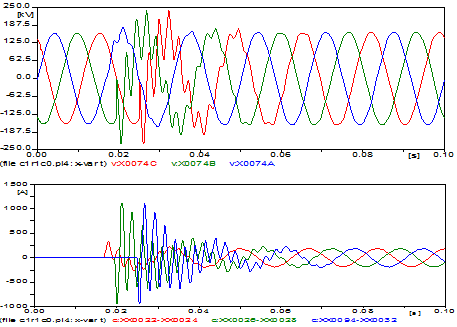 Figure 2: Voltage and Current during the energization of a Single Capacitor Bank

When one or more capacitor banks are switch on when there are others previously energized (Back to back), overvoltages will arise in local and remote buses. These overvoltages are typically smaller than those obtained when the circuit breaker of the first capacitor bank was closed.

The first phenomenon (high frequency, f1) corresponds to the discharge process of the previously energized banks over the capacitor to be connected.

The second one (lower frequency, f2) is associated to the discharge process of all banks in service over the system, and finally each bank reaches its steady state values. If the number of connected capacitor banks is increased, the overvoltage decreases and the overcurrent increases.

An aspect to be considered is that overvoltages in the system do not exceed 2 p.u. of the nominal voltage when all capacitors are connected. Furthermore, it is necessary to apply different methods to minimize the damage on the capacitor banks and the equipment in the power system caused by the overcurrent. 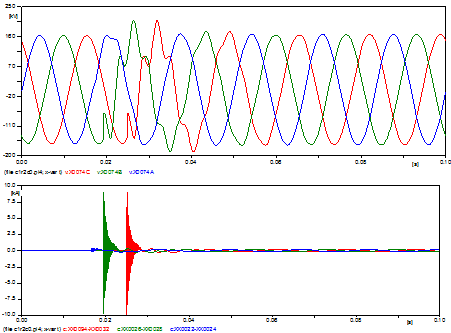 In the process of de-energizing capacitor banks, the most common transient disturbance is the reignition (Restrike). When a capacitor bank is disconnected, an electric arc is produced in the circuit breaker.

If the electric arc is extinguished just when the current wave is crossing by zero to produce an effective de-ionization of the circuit breaker, the capacitor bank will be at its maximum voltage. Subsequently, the capacitor bank is discharged through resistors in aproximately 1 to 5 minutes.

At ½ cycle, the Transient Recovery Voltage (TRV) in the circuit breaker terminals will reach the highest value of 2VM. In order to interrupt the current effectively, the dielectric regeneration must arise faster than the TRV, otherwise it is possible to produce a disruption.

If the capacitor bank is de-energized with an ideal circuit breaker, it should be able to interrupt the current, switching instantly from a conductive to an insulating state, in this case its resistance should change from a zero to an infinite value, being able to avoid transient voltages. However, a real circuit breaker does not ensure a re-strike will not be produced after interrupting the current and this situation must be studied with a more sopphisticated model in ATP of the circuit breaker.

When modeling an electrical system through ATP, it is necessary to define the part of the system under study and model only the necessary elements and equipments. The rest of the system is represented by a Thevenin Equivalent that comprises an ideal source in series with an impedance (RTh + jXTh).

The resistance and inductance can be calculated from a short circuit study (30 cycles), developed through ETAP (Electrical Transient Analyzer Program), DigSilent, Neplan or a similar software, where short circuit currents and the positive and zero sequence resistance and reactance are obtained in the simulation.

After building up the database in ATP, a validation is required. This process is carried out making a comparison of the simulation results in ATP with the results of a load flow study in the software where the system is modeled or with field metering. The next step is to define the premises and simulation cases, and finally, simulations are performed and the results are analyzed according to the theory described previously. The complete methodology is shown in Figure 4. 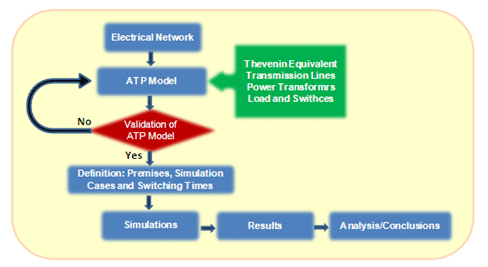 Figure 4: Methodology for the study of the electromagnetic transients

During the switching of capacitor banks in a substation, voltage and current transients arise and it is important to determine its effect on the system in advance, considering the possibility of being other capacitors energized. In this regard, the proposed methodology is useful to verify that the equipment is capable to withstand the overvoltage and overcurrent transients.

Share your thoughts on the first attempt of Carlos who kindly accepted to write this article for all of us. Use the comments section just below.