Nasir, a member of the Electical Engineers Community sent us a 11 parts tutorial on transformers. Today here’s the 9th part focused on Auto transformers. As for the previous parts, you can find them in the blog and on the forum.

Since the output voltage depends upon the number of turns of the secondary winding, so in this way the voltage output can also be varied. For this reason, an auto transformer is also known as a “Variac” because it is mostly used to vary (step up or step down ) the output voltage which has to be supplied to the circuit.

Construction and working of an Auto Transformer

The internal construction of an auto transformer is shown in the figure below: 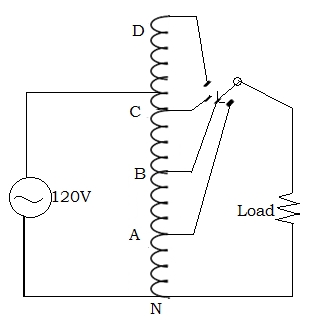 Here it can be seen that there is only a single winding, on which a number of points have been marked, and each point has equal number of turns, i.e. 40 turns between two consecutive points on the winding, which means 40 volts between those two points.

The primary voltage which is of 120 volts in this case, is supplied between the points C and N, as these points accommodate 120 turns as well. So the winding between point C and N is regarded as the Primary Winding over here.

Now the secondary winding will be the one, across which we connect the external load. Since auto transformers have a varying output voltage, so we connect a switch with the load, so that the contacts can be varied to step up or step down the secondary voltage. So as shown in the figure, we make one end of the load as a fixed end and connect it to the point N.

In the transformer in the figure, a switch is used to switch between the points A, B, C and D. But if this switch is replaced by a sliding Tap, then the voltage could be varied continuously and this transformer could also be known as a “Variac”.

Applications of an Auto Transformer

As explained by the figure, an auto transformer has the capability to supply a varying secondary voltage to the externally connected load. So this is mostly used in applications where a continuously varying voltage output is required.

Some of its applications are listed below: