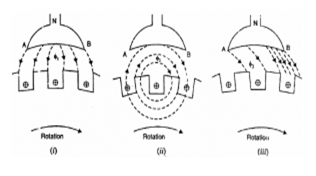 Armature reaction effects the normal operation of DC Generator in many ways. It actually decreases the main flux by 10% which results the generated emf to fall with the increase in load current. Thus as the load increases the armature reaction losses increases and hence the efficiency of the Generator decreases. This can be easily understand from the load characteristics of DC Generator, which is shown below. 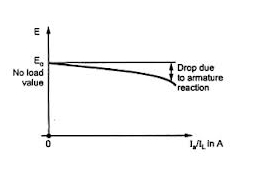 However for a constant load current, the rotation of brush hanger mechanism find the correct neutral zone position and then good commutation is possible to achieve.

As armature reaction effects are not good for normal operation of DC Machine (both generator and motor). That’s why there are some methods to reduce this effect.

First of all the field pole ends are designed in such a way that the higher flux density don’t occur at the pole tips, thus avoiding saturation and hence armature reaction.

Besides this the distortion of main field can be prevented by cancelling the effects of the flux produced by the armature current. This can be achieved by installing commutating poles in between two consecutive main poles. The commutating poles are connected in series with the armature winding, but in such a design that they cancel the effect of armature conductor flux and hence we have left only the main field flux. 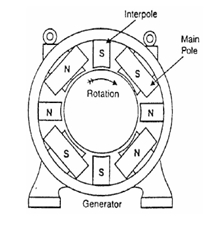 For large machines, the commutation poles don’t completely neutralize the armature current flux because these high speed machines accept changes in their operation in matter of seconds. Thus in this case compensation windings are installed in slots of the poles faces of main field poles. These windings are connected in series with the armature winding in such a position that the current flowing in the compensation winding is exactly opposite to the current flowing in the armature winding at the same time. Thus the compensating winding produces flux, which is completely opposite and equal in magnitude to the armature flux, hence both cancel the effect of each other and thus armature reaction is completely neutralized. 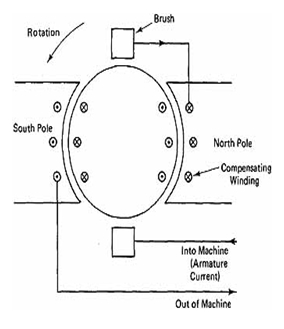 Armature reaction is one of the reasons that causes generated emf in DC Generator to decrease. And this effect is as much important to note as the armature losses and other constant loses like windage and iron losses, because all of them consequently gives us a decreased emf. But compensating winding and commutating poles appreciably decrease this effect and greater part of overall losses in DC Generator is compensated.

This topic is focused on one particular aspect of DC Generator. Would you like to know more about DC Generator?