Here’s the last part of Nasir’s complete tutorial on Transformers (11 parts!). We’d like to thank him for his work and contribution. We are also open to suggestions if you need articles on any specific topic, let us know and we will try our best to post it.

Remember you can share your work, tutorials, debates, experience with us by sending a mail to the team.

These transformers can be used to generate or supply power on large scales like for industrial or commercial uses. These have many advantages over single phase transformers as a three phase transformer provides a more economical approach by using less material since the three cores can be replaced by a single core.

Moreover the constant power transferring property of a balanced load improves the vibrations and fluctuations.

The three phases carry equal current which tends to cancel each other, due to this reason the neutral wire can be shortened and all the three phase wires are of equal length creating a balanced load system.

Construction of a three phase transformer

Other than this way, a three phase transformer can also be constructed on a single core such that all the three windings are wound on that core instead of on three individual cores. This construction is more preferable as it is less costly and more convenient as core material is also saved.

The three windings of a three phase transformer are usually connected in two types of configurations:

When one end of all the windings are connected with each other so that all the three ends form a common end point, then this type of connection is known as a Y or star connection.

A wye connection is shown in the figure below: 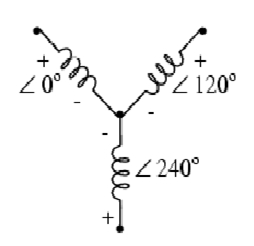 If all the windings are connected to each other end to end, such that one end of first winding is connected to the other end of the second winding and in this way all the three windings form a closed loop triangle, then this type of connection is known as delta connection of windings.

Delta connections are more safe and reliable for use since in case of failure of any one phase, the other two still tend to supply the full line voltage to the output.

Delta connection is shown in the figure below: 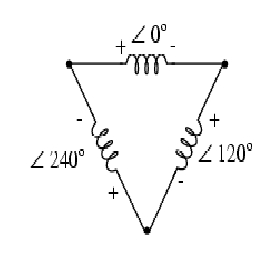 Now the primary and secondary windings can be connected in several different configurations which are as follow:

In general the three phase connections of a transformer can be made as follows: 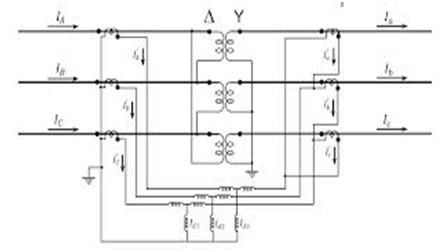 The thing that should be noted here that the wye and delta connections of the windings are inter convertible and can be changed into equivalent forms of one another.

For example, for finding the equivalent voltage of a wye connection in delta connection, the following formula can be used:

Where, n is the turn ratio of the transformer.

Similarly to convert delta into Y:

This was the last post in the series of transformers. I have tried my best to explain everything in full detail. If you guys have any problem in any part of this tutorial, let me know and I will explain it in detail to you. Have fun. Take care.