“Transfer switches: their types and usage”, this is how we could call Nasir’s series of tutorial for the Electrical engineering blog.

Static transfer switches (STS) are such electrical devices which are used for very fast switching between electrical power sources.

They perform instantaneous switching operations and thus supply immediate power to the load.

Working of a Static Transfer Switch

This happens in such a way, that when one of the power supplying elements fail to supply power to the load, they promptly switch towards the backup power source, so that large or over sensitive loads do not have to face any interruption in the power supply.

For this rapid switching operation, they static transfer switches use semi-conductor elements such as SCR’s i.e. silicon controlled rectifiers to perform the shifting of load between two power sources.

Since these are electrical switches, so the time consumed to perform the operation mechanically or physically is saved and the load is protected from even a bit of power cycles of interruption time, since the switching time is as low as a five to twenty milliseconds.

The switch works in a very efficient and reliable manner, monitoring both the power supply sources.

As soon as it senses that one of the source is about to break, or is failing to provide the required power, instantaneously it switches to the alternate of backup source kept.

The following figure gives us an idea of a static power transfer switch, incorporated in a circuit for transferring load: 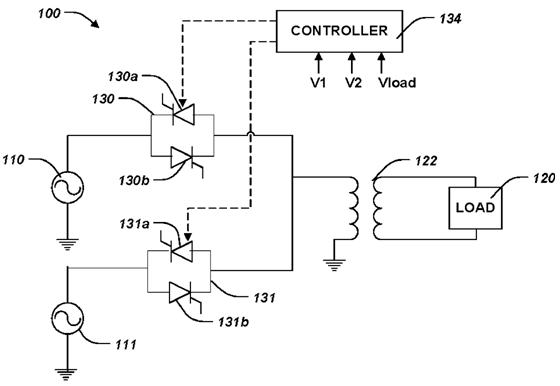 Usage and Advantages of STS

Due to their fastest switching property, static power transfer switches are used for large loads, which are sensitive to power interruption and can cause damage to the appliances or circuitry if such a problem is faced even in the form of a shirt duration power interruption.

For this purpose, they are one of the most preferred transfer switches now-a-days and are used in almost all the industrial applications and some domestic use as well, since they provide an efficient backup power management, providing a better power quality and reliability as well.

While using them, it should be kept in mind that two reliable power sources must be available for the switch to transfer load to.

Parts of a Static Transfer Switch

The block diagram of a static switch is shown below: 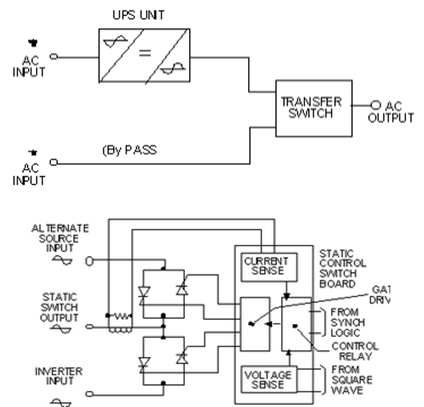 Depending upon voltages, static transfer switches can be classified into two categories:

While choosing one, there is a kind of tradeoff between both these options, as each has its own pros and corns. All you have to do is buy the one which satisfies your requirements the most.

In household applications, these switches are mostly used with a UPS, as it immediately switches from the main power supply of the house to its stored back up power.

The way it is incorporated with a UPS is sown below: 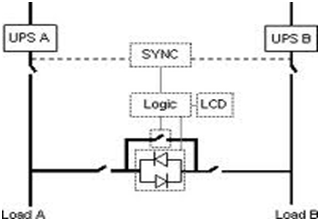 So this was all for today. I hope now you people will be having a bit detailed knowledge of these transfer switches and there types and usage.

In my next article, I am going to tell you about the three way transfer switch. So stay tuned and keep visiting us for some quality knowledge.